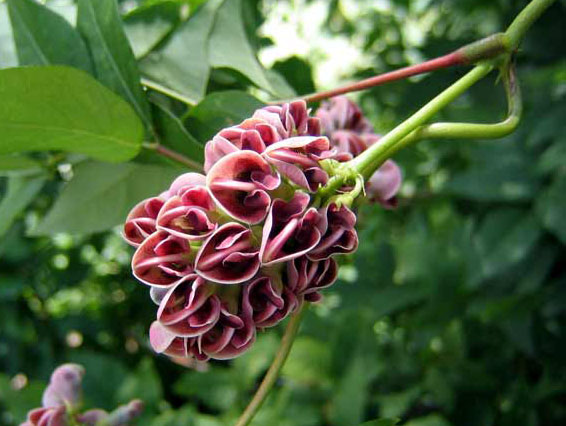 Groundnut (Apios americana) belongs to the bean or legume plant family (Leguminosae). It has a vinelike growth form that twines upon and through the shrubbery beneath the forest.

The groundnut is probably the most famous edible wild plant in eastern North America. The species range is very broad, from Ontario and Quebec in the north to the Gulf of Mexico and from the prairies in the west to the Atlantic coast. The Amerindians throughout this area utilized Apios americana as a major food resource. In fact, it is still common to find these plants growing over old Amerindian village sites.

Early European explorers and colonists of North America often depended upon the groundnut for their survival. In the 1580s, colonists of Sir Walter Raleigh's settlement on Roanoke Island off the coast of North Carolina (the famous "Lost Colony" and the home of Virginia Dare, the first English child born in the New World) sent samples of Apios to Queen Elizabeth I. In 1607, Captain John Smith of Jamestown (Virginia), wrote of the utility of this plant. The Pilgrims of Plymouth (Massachusetts) (1623) survived on

The tubers are highly palatable with culinary characteristics of a potato, although the flavor can be somewhat nuttier than a potato and the texture can be finer.Studies in rats suggest that raw tubers should not be consumed because they contain protease inhibitors whereas cooking destroys the protease inhibitors rendering the tubers safe to eat.

Tubers contain roughly three times the protein content of a potato (16.5% by dry weight), and the amino acid balance is good with the exception of cysteine and methionine.The fatty acid content of tubers is approximately 4.2% to 4.6% with linoleic fatty acids predominating. Thirty-six percent of the fresh weight of a tuber is carbohydrate (primarily starch). The tubers are also an excellent source of calcium and iron. Calcium content is 10-fold greater than a potato and iron is 2-fold greater than a potato, although vitamin C was considerably less than a potato.  In addition, the tubers appear to have numerous health promoting factors. Hypertensive rats that were fed powdered tubers as 5% of their total diet experienced a 10% decrease in blood pressure and also a reduction in cholesterol and triglycerides.  It has been shown that the tubers contain genistein and other isoflavones that have various health benefits, including an anticarcinogenic function against colon, prostate, and breast cancer.