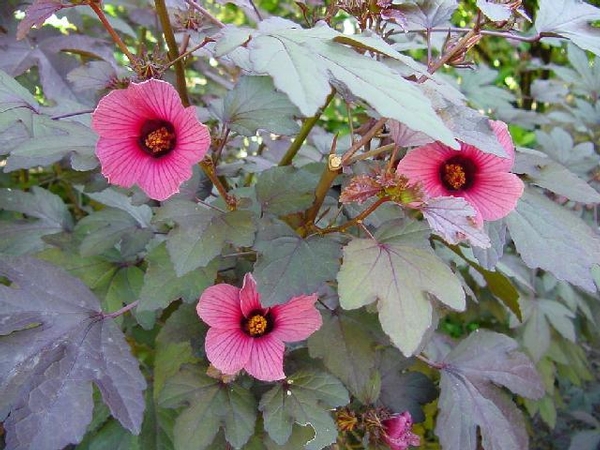 Edible Hibiscus - Abelmoschus manihot This plant was placed into the genus Hibiscus, the subsection Abelmoschus by Linnaeus, but in 1787 a botanist named Medikus proposed that this group of plants be made a separate genus and it’s been so ever since.  It was introduced into Europe around 1712 from India and is listed in an American seed catalog dated 1806.   The leaves of the many varieties are highly variable.  Some are heart shaped, some spear shaped, and some are palmate with 3, 5 or 7-lobed similar to the maple leaf, but often more deeply cut.

In the ground in warm climates (Zones 8-10), it is a perennial growing to 6 ft or taller. In mild temperate climates with some winter frosts, it dies back to the ground and grows back from the underground parts.

Daily values are based on 2000 calorie diet.

Edible hibiscus is a nutrition powerhouse.  When compared to cold climate greens such as cooked spinach, cooked edible hibiscus has much more of everything that’s good for us.  It’s got twice as much protein as spinach, not insignificant in parts of the world where protein sources are scarce or expensive, nearly twice the vitamin A, more fiber and nearly as much vitamin C as a small banana (when cooked, mind you!)  It contains over twice the amount of riboflavin, nearly twice the thiamine and a lot more of several of the minerals, including iron, potassium and calcium.  Convinced yet?

There are important traditional medicinal uses as well.

The parts of the plant that are eaten are the young leaves and shoots, which are cooked, baked or stir fried and which exude a gelatinous substance similar to okra.  In fact, this plant is in the same genus as okra, Abelmoschus esculentus.  In the Pacific, a favorite preparation method is to cook it in coconut milk.  In Hawaii, my favorite way to prepare edible hibiscus was to stir fry it in Asian sesame oil in a wok, with a couple of cloves of pressed garlic. After they were cooked tender, I added a small amount of low-sodium soy sauce and a very small amount of water. It was delicious, but you have to enjoy the mucilaginous texture.